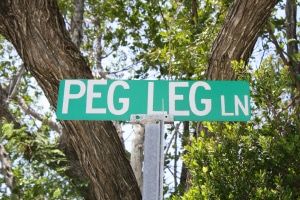 As you know, I love driving into sub-divisions and seeing theme-named streets! Pulling into this one made me smile being a history buff remembering the stories of Pirates in movies and literature.

Peg Leg: Is an artificial limb fitted to the remaining stump of a human leg. Though its use dates to antiquity, they’re mostly associated with pirates, you’ll find at least one in every movie.

Treasure Chest: Buried treasure is an important part of the popular beliefs surrounding pirates. According to popular conception, often buried their stolen fortunes in remote places, intending to return for them later, often with the use of treasure maps.

Buccaneer: Were pirates who attacked Spanish shipping in the Caribbean Sea during the 17th century now synonymous with the word pirate.

Jolly Roger: A wide variation of flags flown to identify a ship’s crew as pirates that were about to attack. The flag most commonly identified today is the skull and crossbones.

You can find these Pirate themed street names for yourself by turning at Mile Marker 23.0 oceanside onto Cutthroat Drive or bayside at Yardarm Road and just begin driving noticing as many different names that remind you of an era gone by.

*Assumes 2.799% APR, 20% down payment, and conforming 30-year fixed rate first mortgage on a single family, primary residence. The monthly payment you enter includes only principal and interest. Additional required amounts such as taxes, insurance, home owner association dues, assessments, mortgage insurance premiums, flood insurance or other such required payments should also be considered. Not all individuals will qualify for a mortgage loan based on the payment entered. Rates cited are for instructional purposes only; current rates are subject to change at any time without notice.  **Posted APR is based on Mortgage Assumptions.
Copyright © 2021 Fidelity Home Group supports Equal Housing Opportunity | All Right Reserved  | NMLS Identifier 1834853. Fidelity Home Group is not affiliated with the Department of Housing and Urban Development (HUD) or the Federal Housing Administration (FHA). Not intended for legal or financial advice, consult your own professionals if such advice is sought. Accessibility Statement  | Consent to Receive Electronic Loan Documents  |  Cookies Policy   |  Disclosures  | Email and Mobile Policy |  Fair Lending Policy  |  Mortgage Assumptions  |  NMLS Consumer Access  |  Privacy Policy  |  Terms of Use
Contact Us
786-755-7400
Schedule a Call
Schedule an Appointment
Send a Message