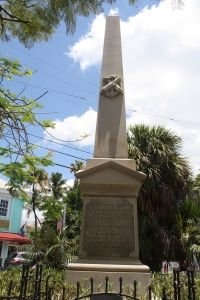 What a combo, Egyptian Obelisk and the American Civil War in the same sentence… who would’ve thought! Here’s a 150 year old overlooked historical monument that is once again seeing the light of day.

Speaking of the light of day, what a great segue! Today’s High School History lesson refresher:

An obelisk is a tall, four-sided, narrow tapering monument which ends in a pyramid shape at the top thought to represent the descending rays of the sun.

Welcome to one of Key West’s oldest monuments! Erected 1866 by the Navy club of Key West to the memory of the  officers, sailors, & soldiers of the Army, Navy & Marine Corps of the United States, who lost their lives in their Country’s service at this former Union (Northern/Blue Coats) Civil War stronghold from 1861 to 1865.

This monument represents two perspectives on how the Civil War affected the residents of Key West. The obelisk in the center of the memorial plot was erected for the Union soldiers. The black ornate wrought iron fence surrounding the obelisk was built by a staunch Confederate to memorialize the loss of Confederate soldiers (Southern/Gray Coats).

*History lesson #2 for today: Though located in the deep south, Key West was in Northern Union control for the ENTIRE CIVIL WAR… not the Rebel South!

You can find this forgotten Egyptian style Civil War obelisk at the corner of Greene Street & Whitehead Street.