Kentucky Derby Has Ties To The Florida Keys 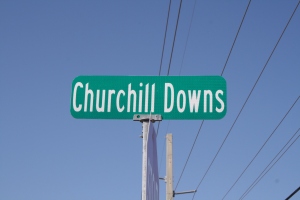 Saturday was the 146th running of the Kentucky Derby in Louisville at the famed Churchill Downs. The time-honored event is also known as the “Greatest Two Minutes In Sports”. Even though I’ve been there, I still retain my “Man Card” by never wearing one of those big floppy hats nor sipping a mint julep!

In honor of this years winner ‘Country House’ I bring you the Florida Keys road sign named after that oh so famous race track venue Churchill Downs. Though I don’t know how it got its name, the name itself and the fact of it being Kentucky Derby weekend was good enough for me! Since this blog is now done, it’s time for an ice-cold long-neck and once done with that one I’ll have another in honor of the 2012 winner named ‘I’ll Have Another’!

You can find the street named Churchill Downs somewhere near Mile Marker 104 bayside at a tiny bridge crossing a canal in Key Largo.