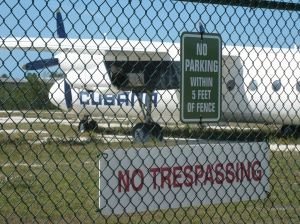 Want to see a part of history? It’s right here at the Key West International Airport up against its northern fence. Don’t go to the airport because they won’t let you see it… but I will!

This historic Antonov-24 aircraft can be seen ONLY by entering Little Hamaca Parks Flagler Avenue entrance and driving up the main road about a half mile down on the right. I walked up to the fence to get both of these photos, one of which I stuck thru a gap in the fence only wide enough for my camera lens on zoom to get the photo with no chain links. The  Antonov-24 (AN-24) is the most popular Soviet made turboprop aircraft in the world. You might ask: “Why is the plane still sitting there?”, here’s the funny but TRUE story. It’s still property of the Cuban Government and they do want it back… but, they are unwilling to pay the planes storage fee that has accumulated for the past 9 years & 11 months… I can only imagine what that price tag is!

This is FREE and a part of history, wow what a find this was, trying to find out the facts about it was the hardest of any blog yet… but I finally did! AND HERE IT IS… Ripped directly from the headlines of the Miami Herald, here’s the actual news article that appeared in the paper on that historic day on November 11, 2002.

KEY WEST – A group of 10 Cubans landed at Key West International Airport this morning on what authorities said was a small Russian-made cargo plane. The Antonov, which was escorted to the Key West airport by two U.S. fighters, landed at 10:41 a.m. K ey West Airport manager Peter Horton said the airport had advanced knowledge the plane was coming, “but not much, just a few minutes.” Horton said the 10 Cubans — the pilot, eight adults and a small child — left the ramp accompanied by officers from the U.S. Immigration and Naturalization Service. Horton said the white Antonov appeared to be a cargo plane. ”When we got the call that they were on the way they were already in our landing pattern,” said Horton, who added officials didn’t know yet where the plane originated. ”It’s our understanding that this is a defection, not a hijacking,” Horton said. “The aircraft is not configured for passengers, it’s configured for cargo.”